A couple of weeks ago we headed to the Cotswolds for a short break.
If I am honest, I didn’t do a great deal of research before we got there and had just a couple of places in mind to visit, however, when Stressy Mummy commented on one of my instagram posts from Cotswold Wildlife Park with suggestions of places to visit, my plans changed.
She suggested Bourton-on-the-Water which is regularly voted one of the prettiest villages in England and is it was just a short ten minute drive from our Cotswold Holiday Cottage, I was sold.

We arrived early and found two coaches packed full of tourist arriving, so knew it was a popular location and I can certainly see why with its picturesque bridges dotted over River Windrush.

There is plenty to see and do with a wealth of attractions and shops, restaurants and tea rooms and our first point of call was the tourist information office. The staff couldn’t have been more helpful and suggested that we visit Birdland Park and Gardens and try out the Dragonfly Maze, giving me a book of discount vouchers before we left.

If I am honest I could have wandered up and down the river all day, but the kids were keen to visit Birdland Park and Gardens which was a short 5 minute walk along the riverside and is home to over 500 birds and 50 aviaries, plus an interactive discovery zone for kids.

We were greeted by a stunning hybrid Macaw and the kids were amazed by the fact it wasn’t caged at all. In fact, many of the birds in Birdland seem to roam free, happy to remain in their enclosures.
One of our favourite birds has to be the penguin and Birdland is home to England’s only collection of magnificent King Penguins.

The King Penguin is so much bigger than the Humboldt Penguins your normally see in parks and zoo’s, which surprised us all.

Because the River Windrush runs through the park, many of the water birds live in the riverside habitat and we enjoyed keeper talks on many of them and were especially interested in how they kept their Flamingo’s pink colour.

As well as the Flamingos, we found pelicans, cranes, storks, cassowary and waterfowl which live in their riverside habitat, with parrots, owls, pheasants, hornbills, touracos and many more inhabiting over 50 aviaries.

The kids were especially taken with the Cassowary, with Sebby declaring it looked like a dinosaur bird, which led nicely into their Jurassic Journey Trail where we got to track Brachiosaurus, Spinosaurus, Postosuchus and Velociraptors.

We were armed with special dinosaur tracker kits, and ventured into a Jurassic-themed landscape which is home to more than 30 different dinosaurs ranging from a metre-long baby stegosaurus to a 5 metre tall brachiosaurus, with sights and sounds to identify along the way.

Even though the dinosaurs were not animatronic as we have seen in other location, they really enjoyed the trail.

The highlight of their day was by far the Encounters area.

In the indoor discovery zone you can see some fascinating egg laying creatures including snakes, lizards and even poisonous frogs, but it was outdoors where they could get up close and personal with them.

All the kids got to hold Lily, a Royal Python and were all fascinated by her texture.

We also got to meet and stroke a beautiful Owl and a giant rabbit.

It was the tortoise’s that caused the most excitement. They were content to much on the grass whilst the kids got to touch their legs and shells to see what they felt like.

We spent ages with the animals and all the keepers were happy to answer the barrage of questions the kids asked them.

Once I managed to tear the kids away it was off to explore the Temperate and Desert Houses, which are home to birds who enjoy hotter and drier conditions, like this stunning Hornbill which Sebby was convinced was Zazu from the Lion King.

The great thing about Birdland is that you can leave and come back if you want to and after some fun in the park, Isaac was keen to head next door to try the maze.
The Dragonfly Maze is a traditional yew hedge maze with a difference. It is all about finding your way to the centre of the maze to discover the golden dragonfly using a series a clues along the way.

Now, maze solving is not my speciality and it did feel like we were going around in circles for a while. Some of the clues were easy and others a little more challenging but the reward when we found the middle around 40 minutes later was worth it.

The clues you find show you how to find The Golden Dragonfly hidden in the round house at the centre!

Of course we did…………eventually!
There are many more places to explore in Bourton-on-the-Water but sadly we ran out of time. It’s a great excuse for another visit though!

Entry to Birdland Park and Gardens is £9.95 for adults and £6.95 for children but I recommend picking up a free guide book at the tourist office for a free child ticket per paying adult. Tickets for the Maze were £2 per person. 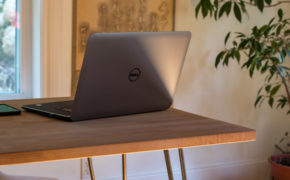 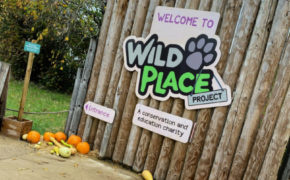 A visit to the Wild Place Project in Bristol 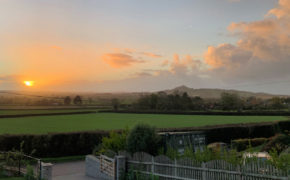 Our stay at Rose Cottage, Glastonbury