The Camp Bestival crew have hit the slipway to launch their good ship onto the high seas of the summer holiday, brimming with incredible spectacles, joyous music, amazing food, luxury camping and tons of fun for all the family. by announcing the very first wave of shipmates, acts and entertainers cruising into Lulworth Castle from the 26th to the 29th July 2018.

Bringing all three of our headliners above board for this first announcement, we are delighted to reveal that Simple Minds will be heading leeward-ho on Sunday night topping the bill before their epic fireworks finale.

Rick Astley for BMG by Pip

Celebrating 20 years of rocking the sweet soul and b-boy control, all with added risqué action, The Cuban Brothers will present La Familia with a full live band show, there will be DJ sets from Fearne Cotton and Huey Morgan’s NYC Block Party, expect all manner of mum moshing and dad dancing with live sets from Stereo MCs, The Undertones, the mighty Pop Will Eat Itself, psych chanteuse Jane Weaver and Jesus Jones and don’t miss hardcore, jungle, techno and breaks action with Billy Daniel Bunter & Raindance. We’ll also have the return of one of 2017’s biggest hits, Elvana: Elvis Fronted Nirvana, fiddle-fuelled folk from Chris Wood, and junior rave time with Big Fish Little Fish.

As ever, family shows and entertainment are front and centre on the promenade deck with top billing turns from long time CB legend Mr Tumble and Castle Stage faves Dick and Dom who commented on their return: “We’re back for our seventh year. HUZAAAR!!! Setting sail now in our tiny pink tub. See you in the summer, you nautical sea monkeys!”

There will be lots of delicious food and drink on offer too including The Feast Collective hosted by DJ BBQ, River Cottage presents Family Feasting & Culinary Workshop, Zoe’s Ghana Kitchen’s Kente Kala-Bash Supper Club, and Rob & Josie’s Gin Festival, with lots more to be announced.

A handsome complement so far, we think you’ll agree but we’re not quite all aboard just yet. There are many more hands due on deck so keep a keen eye in your crow’s nest for more maritime beauties coming alongside soon!

With Camp Bestival Setting Sail for 2018, they thought it only right to partner with the greatest sailors we know: the Ellen MacArthur Cancer Trust! For the first time this year, they’re adding a £1 charity donation on to all Camp Bestival tickets, which will go directly to the Trust (Reg. Charity no. 4597114). This money will be used to fund their amazing work that helps young people rebuild their confidence after being diagnosed with cancer.

We are super excited by this news, are you? 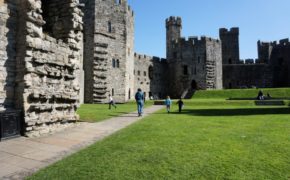