Poppies: Wave at Fort Nelson and the Royal Armouries

Did someone say “FREE day out”?
We love exploring museums with the kids as it gives them a real insight into life gone by or an interest in science and they are even better when they are free.
Fort Nelson is a 19th Century Fort which looks over the city of Portsmouth and the Solent and displays a number of significant pieces of artillery and artillery related artefacts through the ages.

There are over 700 items of artillery from many countries which span over 600 years, many of which are brought to life whilst sensitively telling the unique stories behind them.

But that’s not all, there are 19 acres of ramparts, outer fortifications, secret underground tunnels, and ammunition bunkers to explore in this fully restored Victorian fort which offer spectacular views over the countryside surrounding it.

Fort Nelson is actually part of a large ring of forts built to defend the naval base of Portsmouth and the museum itself explains how and why the Fort was built. Isaac was fascinated by all the materials used and spent ages investigating all the displays.

The museum is very fact based and the displays do require some reading, however, there are some screens dotted around showing some films and other displays set up for the kids to play. Isaac and Eliza particularly enjoyed comparing an old battle field hospital with a more modern one that was introduced by Florence Nightingale.

Of course, there is a lot of artillery to see, including a section of the Babylon Gun, which was commissioned by Saddam Hussein and would have a barrel 156 meters long with a one meter bore and was expected to achieve a range of 750 km!!

Some of the older artillery is displayed within the walls of the base itself…….

…..whereas some of the larger, more modern pieces were displayed in a large purpose-built building in the central courtyard.

By far the kids favourite part of our visit had to be exploring the vast tunnel system that sits under the Fort, which was a welcome relief from the warm sunshine.

We were there to see the Poppies on Tour, part of the Blood Swept Lands and Seas of Red which was installed at the Tower of London in 2014 and has been created to mark the centenary of the outbreak of war. The Wave is an iconic sculpture representing an arch of red poppies suspended on towering stalks which rise from the ramparts.

We made the visit to Fort Nelson on a Sunday and it was understandably busy. You can see the poppies wave clearly once outside, but if you want to get up close and walk under it, you have to join a managed queue, which took us about half an hour.

Our visit was at the tail end of half term so I imagine it will be a lot quieter during week days.

Having a queue system worked well, as it gave everyone the chance to get their photo’s without other families getting in the way and the kids made their own entertainment by climbing the ramparts and examining the cannons as we waited.

The wave of poppies is an awe-inspiring sight and breathtaking from every angle. There is a reflection room provided for those that want to take a moment with their thoughts too, which is a lovely touch.

Although you are not allowed to touch the display, there is a poppy at the end of the trail that you can touch and hold, so you can see how it was made.

If you want to see the Poppies on Tour: Wave at Fort Nelson, it will be there until the 24th June 2018. Entry is free, but it does cost £3 to park.
Don’t worry if you don’t get to see the display in Portsmouth, the tour continues all over the country, ending up at the Imperial War Museum in November. Find destinations and dates at: www.wherearethepoppiesnow.org.uk/poppy-tour/ 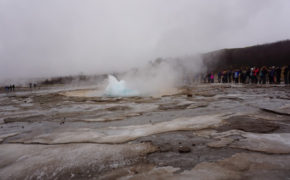 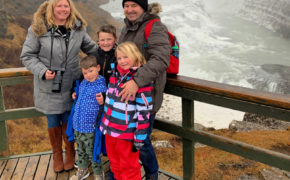