Searching for Santa at Santa's Lapland

Day two of our three-day trip to Saariselkä was our Search for Santa day.
We were given our coach times the day before we left and we were one of the first to arrive for our day that promised to be packed full of fun.
Tucked in our pockets were our magic tickets (the kids letters to Santa, that we had “posted” a few weeks previously) and the timings for our husky rides, the only set time given on the day. The rest of the day we could do whatever took our fancy.

We arrived to a covering of fresh snow and the kids leapt straight in to snowball fights as soon as we alighted from the coach, whilst us adults got our bearings and then wandered down the hill where we found a handy warming tent and activities such as ice fishing, sledging, snowmobiles and skiing.

The kids were keen to try everything and Isaac was soon bouncing around on a snowmobile which was looped around a tree for safety.

Our Husky sled ride was booked for 11.10 and we had planned on doing our search for Santa afterwards, however whilst we were enjoying the sledges, one of the Santa’s Lapland reps came over to advise there were no queues for the search and it would be a good time to go as apparently it gets much busier later.

We walked straight onto a sled which was to be pulled along by a snowmobile. The driver explained that we were going on a fast ride across a frozen lake and not to worry about any cracking noises and we were soon zooming off a speed through a snowy forest and onto a huge expanse of white snow.

The driver slowed as he spied something ahead and the kids squealed with delight when they spotted some presents wrapped in the snow. Our driver asked if we should follow the trail, to which we all shouted “Yes”.

We soon happened across some cheeky elves who flagged us down and started playing with the kids, pulling their hats down and even hopping into the sled with us.

When the slight of hand happened with our “magic tickets” I don’t know, as I was so preoccupied with the elves that I didn’t notice, but that was the whole point. We were soon beckoned over to the small wood cabin in the woods, but who might be inside?

Our own private meeting with Santa was a truly magical experience. They were amazed when he produced their hand-written letters and read through them, asking questions about what they had asked for and answering any questions they had.

He spent lots of time with them and we never felt rushed. It was quite nice to warm up by the fire too as Santa handed out some lovely presents which they will treasure forever.

The cheeky elves borrowed our camera’s too, taking some pictures for us, and a few cheeky “elfies” of themselves too.

Once it was time to say goodbye we left the cabin with the elves, who continued to mess around and make the kids throw snowballs at them.

We then hopped in the snowmobile-sled and whizzed back through the forest to where we had started.

We arrived back just in time for our husky-sled ride where Hubby and I, as drivers, had to attend a safety briefing and the kids were entertained with silly games and songs by the reps. As soon as the Huskies spot the crowd of red suits you can hear their excitement as they look forward to doing each and every ride.

What surprised me was that we all fit in one sled and that only five huskies were expected to pull us, but they did it with ease.

With the exception of meeting Santa, this was the highlight of our day and to make sure both adults get a chance to “drive” you are stopped halfway round to swap over.

Once the ride is finished you are encouraged to make a fuss of the dogs whilst they have a rest.

There is staff on hand to chat to about the dogs and it is obvious to see that they are very much-loved and well looked after. I was surprised by their names though, as most have English names and Dave, was our racing dog in our pack. He also takes a mean selfie!

The Search for Santa day is split between two sites, which you catch a snowmobile-sled to travel between. Both offer warming tents with pancakes or gingerbread and warm berry juice or tea which is all free, plus there are manned open fires dotted around if you need to warm your hands up.

Lunch was served in a hygge filled Scandi log lodge. They served a delicious spaghetti bolognese which all mine went back for second helping of and is the perfect kind of food you need when it’s cold.

At the second site, were more fun activities including Reindeer school where you got to sit in Santa’s sleigh, see where the Reindeer live and learn more about the beautiful creatures before being presented with some reindeer food to take home to put out on Christmas Eve.

It is then time for a ride in a reindeer sleigh, which unlike the huskies is slow and steady, but just as much fun.

They really are beautiful creatures and the fresh snow resting on their antlers made them seem more magical.

The kids also got to feed them their favourite food, Lichen and try their hand at lassoing a set of antlers.

We got the chance to try a spot of crazy golf in the snow, which is more tricky than it looks as the ice makes the surface all bumpy.

There was also a fun pantomime type show to watch in a massive igloo, with two elves hosting. The antics included singing, dancing and finding a missing elf hat.

In a second igloo was the ice bar where the adults could enjoy an alcoholic tipple and the kids a fizz treat. This was the one place you need to bring some money with you, as everything else was included in the day.

Once we had exhausted all the activities on this site, we took the snowmobile sled back to the other to try out some of the other activities we missed earlier.

The lure of the snowmobiles was too much for the kids and they all had a go this time, even Sebby as he giggled and bounced around.

The day didn’t end there, we were booked onto the Northern Lights experience that evening, which I will save for another post, followed by the Gala dinner at the Tunturi Hotel where you are positively encouraged to wear your Christmas finery.

Like the previous nights meal, it is a buffet style meal but this time it is a traditional Christmas dinner, complete with crackers on the table and Christmas games and sing-songs.

We have been very lucky to experience some memorable holidays, including our Carnival Cruise and Walt Disney World, but this Search for Santa day tops every single one of them!!

We booked our holiday with Santa Claus Trips and I cannot fault their customer service. To get the best value and take advantage of free child spaces it is recommended to book your trip as soon as the dates become available, which is typically in the October, the year before you intend to travel. 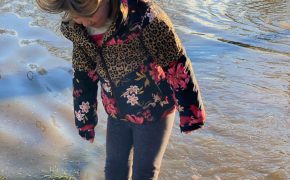 How to choose the right suitcase for you