At the end of last year we stayed in a holiday cottage in Lyme Regis and one of the places I wanted to visit was Pecorama in Beer, Devon but sadly it was out of season so closed.
The kids broke up for half term last Wednesday and we had a couple of days booked at Andrewshayes Holiday Park in Axminster so I Pecorama was my first port of call.
Pecorama sits above the village of Beer and offers stunning views over Lyme Bay below. It is a perfect day out for railway enthusiasts, garden lovers and families with manicured lawns, model railways, play parks and the Beer Heights Light Railway.

We started off in the museum itself which is full of railway models to interact with. The kids loved pressing buttons to make things happen on the track and on a couple of models you could even change the sets from night to day, which saw the lights dim and then the train sets come to life with streetlights and lights in the windows.

At the window there was the opportunity to drive trains around an outside track for 10p, which Isaac, Eliza and Sebastian could not wait to try. They spent ages making them go faster, slowing down and even stopping at stations along the route.

Once I managed to tear them away we headed outside to explore everything that Pecorama had to offer. As part of the entry price you get two rides on the Beer Heights Light Railway and it is the first thing you see as you enter the gardens, so we had our first train ride straight away.

The Beer Heights Light Railway (BHLR) is considered as the finest 7¼ inch gauge railway in Britain and first opened to the public on the 14 July 1975.

The mile long route starts off through the formal gardens and includes many bridges, extensive sidings and a lengthy tunnel to which the kids loved.

With it’s position on the top of the hill, it also offers spectacular views over the Jurassic coast, across to West Bay and as far away as Portland Bill.

Once we disembarked the train we headed off to explore the grounds. It is quite hilly in places but perfectly accessible for buggies, prams and wheelchairs, with lots of nooks and crannies for the kids to run around and play hide and seek.

There are also bridges to stand on so you can wave to the train and its passengers as it trundles past.

We were really lucky to visit on a beautiful day but if the weather does turn the kids can play in the Play Station, a large train themed indoor soft play area.

As it wasn’t officially half term we had the place to ourselves and the kids had a blast racing down the 3 metre high racing slide. The soft play area also includes a twin-lane Astra slide, a spiral slide, cargo climbs, a spinning floor, spider web climb-throughs, giant balls, clear decks, log ramps and much, much more…

We ate lunch in their Garden Room cafe which is set in a Swiss chalet-style lodge next to the soft play area. They offer a good selection of reasonably priced food and drink that appeals to all the family. Isaac enjoyed a huge warm sausage roll, whilst Eliza and Sebby had a sandwich and crisps. It was also here that we picked up our golf balls for a round of crazy golf.

I am pretty sure there was some cheating going on during our game but the kids thoroughly enjoyed it and you can play as often as you like.

There are four outdoor parks for the kids to enjoy. A classic park with swings, slides, a seesaw, witches hat and climbing frames.

Opposite the traditional playground is the Peco Pearl pirate ship, perfect for some swashbuckling role-play fun!!

For older kids and competitive adults, there is also an adventure playground with monkey bars, a bucket swing and other challenges to get stuck in to.

There is a fourth park, Wildway, which we spotted from the train which has more monkey bars, a balance beam and an all important zip wire but we were not sure how to find it, so took our second train trip of the day to have a look.

The entrance to Wildway is at the opposite end of the park, over the road from the entrance gate. You need to open the gate and it is a short walk along a grassy bank to find it.

This park offers beautiful views over the rolling hill of Devon.

We purchased First Class Tickets which included entry to the Model Railway Exhibition, Gardens, 2 x train rides on the Beer Heights Light Railway, a round of Crazy Golf, and entry into the Playstation which cost £12 per adult and £10 per child. Standard tickets are also available at £2 less per person which get the same entry but just one train ride.

I highly recommend a visit to Pecorama when visiting East Devon or West Dorset as it is a full day of family fun!! 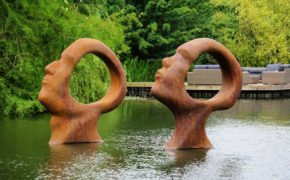