Regular readers of my blog will know that Sebastian is dinosaur mad and when we heard that dinosaurs were invading ZSL London Zoo, we knew we had to visit.

Between 22nd July to 3rd September, visitors the zoo are whisked back in time to Zoorassic Park a prehistoric world where you can come face to face with life-size, moving dinosaurs.
The kids picked up a fun passport style trail to complete before entering the time-travelling tunnel which took us back to the Mesozoic era (about 65 million years ago, give or take a few days).

We emerged from the tunnel in a haze of mist and were greeted by some Coelophysis who were lurking in the shadows.

The trail features lots of information about the Mesozoic era, as well as the moving dinosaurs on display.

ZSL’s tour guides are on hand to help you spot dino favourites and Sebby was really excited to spot a Parasaurolophus as he had not seen one before.

He also enjoyed an encounter with the armour-plated Edmontonia – a tank-like dinosaur covered in spikes….

Once we had finished looking at the dinosaurs, which also included a huge Brachiosaurus, a Pteradactyl and a Triceratops, standing guard over its nest………

…we headed back into a time tunnel, only to find ourselves in 2050!

Here we took part in a dig, where we discovered skeletons of animals that have disappeared from the planet and learned all about the important work ZSL’s conservationists are doing to prevent today’s animals from becoming extinct.

Once we had finished digging we headed back to 2017, where we got to see Children’s TV presenter Andy Day host the exciting live show, Dinosaur Live.

My kids adore Andy’s dinosaur raps and are forever searching for them on youTube, so were delighted when he opened the show with the Allosaurus rap, along with some audience participation.

The premise of the show was that Andy has been on a prehistoric holiday and had brought his friend Ben a couple of presents from his travels, only the presents were not quite what he expected.

The first dinosaur we met was Rosie and we had to examine her teeth to see if she was a carnivore or a herbivore.

Despite knowing it was just a person in costume, it was still quite daunting seeing the dinosaur up close but after a bit of investigation we discovered that Rosie was a Utahraptor, by far the biggest raptor ever to walk the earth and carnivore, so she was sent safely back to her own time.

Andy then announced that he had another present for Ben, a dinosaur called Dexter.

Dexter is a juvenile T-Rex and was far more scary than Rosie as he charged around the stage.

Andy requested the help of a brave Dad from the audience to help him get Dexter on a lead to help keep him under control. Thankfully they were successful and we got to learn some fun facts about the T-Rex.

The show ended with another rap – this time about the Diplodocus with more audience participation which the kids really enjoyed.

We also just squeezed in a quick photo opp too!

Zoorassic Park is a fabulous addition to ZSL London Zoo and is included in the entry price, making it a must visit for any dinosaur fans. 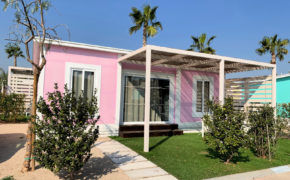 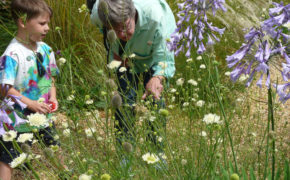